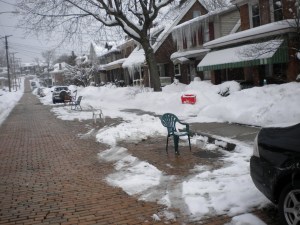 You’re a Pittsburgher if:
• You know at least three people named after Terry Bradshaw
• Your local bar has a “Yings & Wings” night which you attend frequently
• You expect french fries to come on top of your chicken salad
• You can make a four course meal out of perogies
• You save your parking spot with a chair

Until this last snowstorm, I guess I wasn’t a true Pittsburgher because I prided myself in never having defended a parking space with a chair. In fact, the whole idea of claiming a section of public roadway as personal property seemed undemocratic- a real slap-in-the-face to the concept of creating community.

But then I spent 2 ½ hours digging my car out from under a mound of snow and ice.

Since the street parking around my house was cut by at least a third due to poor snow removal, my neighbors were becoming protective of their parking spaces. Slowly, chairs, garbage cans, flower planters, tires, and saw horses began to hold the place of SUV’s and minivans.

And then I joined in the hysteria. For nearly a week, I lugged an old green chair from my porch to save “my” parking spot as I went about my day. I would even call Brian in the evening when I was a few minutes away and have him remove the chair and stand guard until I could safely tuck my VW Rabbit into its rightful slot.

However, yesterday I was running late for an appointment and forgot to grab the chair. When I returned home, my spot was occupied and I had to park three blocks away. I was furious. I thought about writing a mean message in the dusting of snow sticking to the windshield of the problem vehicle. Something like: “How dare you take my parking space!” or “MOVE or DIE” or “ F— You!”

Luckily, I took a deep breath and came to my senses before I made a fool of myself.

As I write this, I’m still stunned at the attachment I cultivated for a parking space. But, if I’m honest, the emotions and sense of entitlement that bubbled up to the surface in this situation are no different than my reactions when other possessions (and even relationships) in my life are threatened. I’m certainty not proud of this character trait, but I’m thankful to have exposed it and hope to correct it.

And, Lee Anne– you & Paul will be relieved to know that I’ve decided never to save a parking spot again.