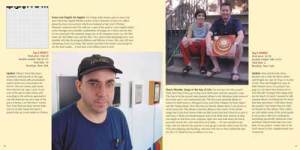 I had written my dear friend Cally about what I was doing and he forwarded it on to some friends of his. One of them wrote him back, telling him about a project that happened early in the decade. Here’s a plug for that project, http://www.allmylifeforsale.com/

‘Fed up with his inability to quell the constant flow of objects into his apartment and determined to be able to fit his life into the trunk of his car, one day John Freyer decided to sell everything he owned on the Internet. He invited his friends over to tag his possessions and systematically put them up for sale on eBay. An opened box of taco shells, half a bottle of mouthwash, almost all of his clothes, his favorite records, his sideburns (in a plastic bag), his family’s Christmas presents (not yet given), furniture: John didn’t let sentiment or utility stand in his way. Soon his belongings were sold all over the world, with a bag of PorkyÕs BBQ Pork Skins making its way to Japan, and a chair ending up in the Museum of Modern Art. ‘ And then he made a book about it.
Cool, right??? I went to amazon to buy the book used. I found it for 49 cents, and was about to buy it, when I stopped myself. I decided to check and see if my local library had it and they did, so I put it on reserve….more in the spirit of what I’m trying to do.
As inspired by this facinating gentleman, John Freyer, I decided to do a sweep of my clothing and get rid of things I wasn’t wearing anymore. I’m not selling them on ebay, but I did donate the following to the Salvation Army:
1 pair of jeans, 2 purses, 3 t-shirts, 3 dresses, 2 pants, 8 tank tops, 2 shirts, 3 books, 5 shorts, 2 knick nacks, 2 sweatshirts, and a vest.
And you know what? I’ll bet you I won’t miss any of it.
-Courtney